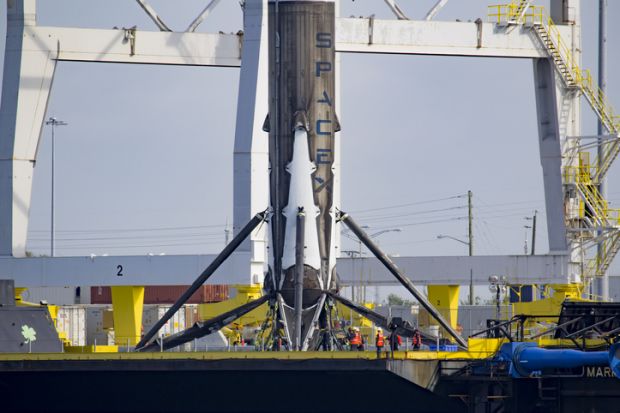 It may not be their final frontier, but US universities have found a bright spot at a time of earthbound enrolment and financial problems: space.

With the one-time government monopoly on extraterrestrial activities giving way to private-sector enterprise at supersonic speed, academic programmes are being added and existing ones expanded to teach not only space science and engineering but space entrepreneurship, management and law.

“In more than 30 years I’ve never seen this much going on,” said Pablo de León, chair of the department of space studies at the University of North Dakota.

The university was getting twice as many qualified applicants as it could accept, Professor de León said, and was exploring ways to increase its capacity. It has launched a doctoral programme and is offering online courses in space management and law.

In the newest development, Arizona State University’s Thunderbird School of Global Management has announced that it will launch degrees next January in space leadership, policy and business. The dean, Sanjeev Khagram, speaks only partly in jest of changing the institution’s name to the science-fiction-inspired Thunderbird Academy of Intergalactic Leadership.

The reason for this trend, said Professor de León, who worked on the space shuttle programme, was “a renaissance of space where we’re seeing all of these amazing things going on with private companies taking over in areas where Nasa was alone”.

Including fast-growing private spaceflight companies such as Elon Musk’s SpaceX, Richard Branson’s Virgin Galactic and Jeff Bezos’ Blue Origin, the global space industry was worth an estimated $424 billion (£304 billion) annually in 2018. That’s expected to rise to $1.2 trillion by 2030, according to Space Foundation.

SpaceX, which is already flying astronauts to the International Space Station, won a $2.9 billion contract in April to build the spacecraft that will land astronauts on the moon again. The Biden administration has proposed a 6.3 per cent budget boost for Nasa. The international Artemis Accords, signed last autumn, set down rules to govern space exploration and development.

All of this activity “is waking people up to the fact that there is potentially money to be made out there”, said David Alexander, director of Rice University’s Space Institute in Houston.

“We are thinking about how do we sustain and grow,” said Professor Khagram. “And this field is going to grow dramatically.”

That’s very different from what Greg Autry often heard from the two business schools where he previously taught, and where he proposed adding concentrations in space management and policy.

“Nobody took the idea very seriously,” said Professor Autry, who has been hired to run the new Arizona State programme.

“What changed was the investment environment over the last 18 months,” he said. “When suddenly Merrill Lynch is hosting an annual space investment conference, it’s: ‘Oh, we’ve missed something.’”

Many of these university programmes are multidisciplinary, equipping managers with science knowledge and scientists with management skills.

Industry demand seems strong. Many Nasa stalwarts have reached retirement age and the agency is beginning to replace them. SpaceX has nearly 8,000 employees, Blue Origin more than 3,000.

“They have been hiring by the hundreds,” Professor de León said. “Before the ink is dry on their degrees, [graduates] are being picked up by private companies or Nasa.”

But that’s not the only reason universities are finding students applying to these programmes.

“These young people are saying: ‘Look at what Elon Musk is doing. Here’s this guy talking about going to Mars. I want to be a part of that,’” said Rice’s Professor Alexander, a solar physicist.

Industry experts said US universities were far ahead in training people to work at spaceflight companies, for the simple reason that most of them are based in the country, which has 12 commercially licensed spaceports. Meanwhile, Embry-Riddle Aeronautical University in Florida has added a research incubator to help people develop space-related and other businesses.

But the US is not the only place where this is happening, as other nations take off into space. The International Space University, based in Strasbourg, runs programmes worldwide. In February the United Arab Emirates Space Agency picked its first 10 “Arab space pioneers” to train in the space sciences; there were 37,000 applicants.

“The younger generation was raised in an age when science fiction was the dominant genre in entertainment,” Professor Autry said. Those prospective students “want to realise that science-fiction vision. But they also see space as unifying, as a place to find solutions to our problems that we can’t find on Earth.”