The child refugee and business prodigy discusses racial prejudice and personal perseverance, and the prospects for Kamala Harris 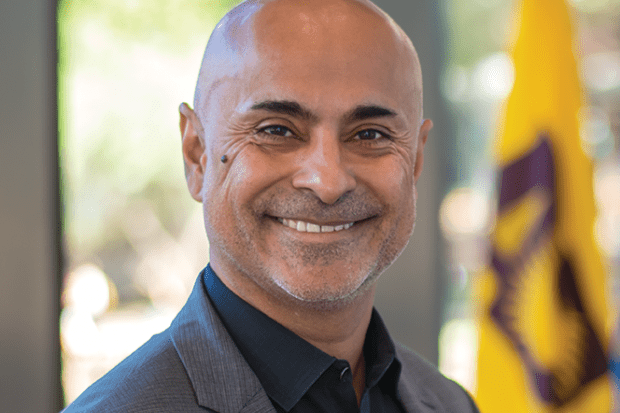 Sanjeev Khagram is dean of the Thunderbird School of Global Management at Arizona State University. A child refugee from Uganda whose family fled the violent dictatorship of Idi Amin, he previously held professorships at Occidental College and the University of Washington.

How has this shaped who you are?
I am of Asian Indian descent, and my paternal family was one of the wealthiest families in Uganda by the time I was born, with enterprises across a range of industries from electronics and real estate to insurance and agribusiness. We were expelled by Idi Amin in 1972 and lost everything, having to flee to Kenya in 48 hours. We were then taken to refugee camps in Italy. My family had only $50 – £40 now or £200 then – when we arrived in New Jersey.

Where did you end up?
The town of Scotch Plains, just outside New York City. We literally lived on the tracks – one side was African American, the other side Jewish, Italian, Irish. No South Asians – we were the only non-white, non-black family. All my friends growing up were African American, and the joke was that I was the true African because I came from Africa.

What did your parents do professionally in the US?
My father worked on underwater sea cables at Western Electric. My mother started off as nurse’s aide, then data entry operator. I started a business at age 13 running gift shops in five hotels across New Jersey, and they ran that business when I went to Stanford.

What’s your most memorable moment at Stanford?
In my undergraduate years, I designed my own major in global development engineering, with courses across 10 departments and with four advisers, from civil engineering, economics, politics and anthropology.

Does a personal crisis seem necessary for such motivation and success?
That’s one of the pathways, but not the only one.

How does a parent or teacher instil that in a child or student from a comfortable background?
Keep pushing outside your comfort zone, and be incredibly grateful for all that we have.

Why should an average citizen care about your work?
Thunderbird was founded by the military pilots returning from the Second World War, who believed that trade led to peace. Our alumni are leaders of companies, governments and civil society who help with job creation, environmental sustainability and more.

ASU already had the Carey School of Business when it acquired Thunderbird in 2014 – why get a second, and why not merge them now?
Carey is renowned in areas such as supply chain management. ASU made clear it wanted Thunderbird to keep its focus on its global role. We have regional centres worldwide, and everything is global – every textbook, every case study.

What are the best and worst things about your job?
Best is our school’s global outlook, and its limitless ability to help our students and partners pursue sustainable, equitable and peaceful prosperity. Worst is dealing with bureaucracy, silos, old habits, long hours and interpersonal pettiness.

What’s the solution to that last one?
Don’t respond in kind to pettiness. Instead, figure out the underlying cause of the conduct and address that with empathy. Also, give colleagues positive reinforcement, and celebrate success jointly.

Who is someone you’ve always admired?
My parents, for enduring, sacrificing for, and loving me and my sister – basically giving up their lives so we could have greater opportunities. From Italy, they could have gone back to India, which would have been culturally better for them. But they decided to come to the US, sacrificing their immediate satisfaction, their fulfilment, their aspirations, for their children and future grandchildren.

Do you have any thoughts on another Indian-African American, Kamala Harris, running for vice-president?
I’m a little biased in that area, because Kamala is a friend. Her father, Donald Harris, was my professor and mentor at Stanford, and we’ve known each other for a long time. I’m very proud of her, given my background, and it’s great for our society, no matter the outcome of the election, to have someone like her as part of the democratic process.

Given the political and racial climate these days, how bad do you expect things to get for her?
Whether you want to vote for her or not, one has to respect what she’s accomplished, and what her family has done. Unfortunately, we are in a time in our country’s history and our world’s history where nastiness, extremism, polarisation and exclusion have been in the ascendant. I know she already has been, and will continue to be, really punished by a whole set of people out there. It’s a sad state of affairs in our country and in the world. It’s tied to globalisation, and it’s why I came to Thunderbird – to address the state of where we are as a global community, not just a national community.

What keeps you awake at night?
Extremism and polarisation around the world, growing inequality, and environmental destruction – especially climate change.

What do you do for fun?
I play competitive tennis, play jazz trumpet and love to dance – dances from around the world.

Many Americans seem down, or even embarrassed, about their country these days. What can you say to them, from your perspective?
I’d agree, we are in one of the most difficult states that we’ve been in, in a very, very long time. But thinking back to a wonderful family from a Unitarian church that welcomed us, the best of the US, the best of who we are as a people, will prevail. I’m confident of that.