Los Angeles, United States - Gary Gero is the chief sustainability officer for Los Angeles County, the most populous county in the entire United States. Home to more people than 41 of the 50 states in the US, the area has a metropolitan economy that is the third-biggest in the world.

Because the place is so sprawling, sustainability historically took a back seat to development. Nature was at the mercy of people's needs, and the climate has paid the price.

But now, all that is changing fast, Gero says, as he manages the sustainability strategy for a region with 88 total cities - including the City of Los Angeles.

Gero told Al Jazeera that achieving carbon neutrality is "not just shutting down fossil fuels, as we need to get there through land-based solutions".

"If you own 40 acres (16 hectares) at the base of Angeles National Forest and want to build 200 new homes, maybe that's not the best place," he said of increased wildfire risks from sprawl.

For Gero's county, the greenhouse gas "inventory" covers everything from energy usage and transportation fuels to carbon sequestration. And his office has begun a vulnerability assessment to measure the impact of a changing climate on communities.

Los Angeles County's stormwater management is "a classic example of how rain flowing through watersheds to the ocean doesn't care if it's crossing a border between South Gate and El Monte", Gero said, referring to two nearby cities in the county.

Under a new 10-year programme to spend $300m annually, the county aims to collect water in a more efficient way - with trees mounting a key front-line defence.

At the World Economic Forum (WEF) currently underway in Davos, Switzerland, policymakers are floating ideas to see which hold the most water in solving severe environmental problems.

"Restoring nature, as well as stopping destruction of nature, is a critical and integral part of how we're going to solve the climate challenge," said Justin Adams, executive director of the Tropical Forest Alliance at the WEF. 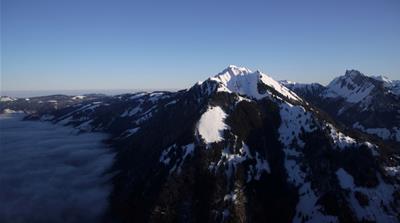 Planet Earth has half as many trees as once existed, but scientists say - notwithstanding the financial cost - that nature can accommodate one trillion more [File: Jonathan Ernst/Reuters]

"We are not saying nature alone can solve the problem," Adams told Al Jazeera. "But we can't get there without nature," he added, explaining the genesis of the 1t.org initiative to add one trillion trees within the next decade by mobilising the global reforestation community.

Citing research published by Swiss scientists last summer, Adams said that the Earth had six trillion trees after the last ice age but is now down to just three trillion trees.

"This is about restoring forests, growing rather than [just] planting," Adams said about the conservation initiative relying on broader sustainability efforts as well as a long list of aggressive climate measures.

US President Donald Trump announced this week that he would sign on to the project, even as Swedish climate activist Greta Thunberg warned that one trillion trees would not supplant mitigation by national governments.

"In each and every place, we need to find locally relevant actions," said Adams about improving urban quality of life and shoring up rural woodlands. "California is part of the issue: how can we restore the health of those forests?"

The company will invest $1bn in an innovation fund centred on carbon storage technology and reforestation. One of the firms looking to partner with the Seattle-based software giant is Pachama, a company whose online marketplace connects those offsetting carbon emissions with groups doing reforestation.

Pachama's projects include forests in Northern California around Mount Shasta and a redwood region of Sonoma County, in addition to areas on the East Coast of the US and in Brazil.

California is part of the issue: how can we restore the health of those forests?

Diego Saez Gil, Pachama's CEO, hopes his startup in San Francisco will play a major role in restoring one billion hectares of forest and capturing 200 gigatonnes of CO2 - the tall order recommended by a United Nations report last summer.

Saez Gil prefers not to focus on "building factories to suck up air from the atmosphere, since we already have 'machines' to take out carbon called trees".

He told Al Jazeera that to ensure funding and accountability, his firm's "AI algorithms can determine with a high degree of precision how much carbon is in those forests".

'Innovate our way out'

In Davos this week, the Global Climate Restoration Task Force was launched by the Foundation for Climate Restoration (F4CR) and a coalition that includes the Thunderbird School of Global Management at Arizona State University and Santa Clara County Supervisor Dave Cortese.

A new report from the Thunderbird School identifies a multitrillion-dollar market for the deployment of restoration techniques. "It will take the world coming together as a family to achieve the transformation we need," Sanjeev Khagram, the school's dean, said of the costly goal.

Rick Parnell, the CEO of F4CR, said the challenge for permanently reducing atmospheric CO2 was "to identify the best mix of solutions that are safe, scalable, financeable".

Cortese, representing some of Silicon Valley around San Jose, California, oversaw the adoption of a local resolution "declaring a climate emergency that demands immediate action to halt, reverse, restore and address the consequences and causes of global warming".

With his new partners, Cortese is calling on all counties to take the same step, which he describes as both a symbolic starting point and pragmatic course of action.

"Recently my board of supervisors dramatically increased the number of trees being planted," he said, despite being unsure "that government ultimately is going to solve this problem".

"We have to get individuals and the private sector marching along with us, or else we lose the game," said Cortese. "We don't have enough horsepower ourselves."

Raised in the area when it was still agricultural, Cortese argues that a "carbon restoration workaround" is possible if the tech industry prioritises the "green industrial revolution".

"Money is to be made there, it's not just altruistic," he said, adding that climate investment was "less of a bet, more of a buy-in".

However, Cortese concedes that technology alone cannot guarantee a culture shift. "If people are borderline [climate] deniers, and they want us to innovate our way out, good luck with that."

Feb 03 Thunderbird in the News